REWARDING THE OUTSTANDING AND THE EXCELLENT 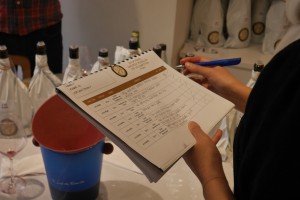 With an expanded vineyard area and more grape varieties in the
mix, this year’s Sud de France competition really put the judges
through their paces

In its annual quest to find the best wines from one of the world’s most exciting regions, this year’s Sud de France Top 100 competition once again wowed the judges with a stunning range of top-quality reds, whites, rosés and sparklers.
Now in its fifth year, the competition was bigger than ever as the area covered by Sud de France has been expanded, so the wines come from even more diverse terroir and grape varieties.
And the expert judges who blind tasted all the wines to come up with the definitive 100 were unanimous in their conclusion that there has been a consistent upturn in quality from the region over the course of the competition.
Broadcaster and writer Oz Clark said: “Far more good wines are being entered. Winemakers have gone past an obsession to make big beast wines and are going back to making what we can drink with pleasure.”
And BBC Food and Drink presenter Joe Wadsack agreed, saying: “All categories have become more consistent over the five years of the Top 100 competition. There is genuinely a difference, and any obvious mistakes, such as over-oaking, are now eradicated. There is plenty I would enjoy drinking.
The job of judging is getting harder every year.” In a new twist this year, all the judges – who also included chairman Tim Atkin, the Wine Gang’s Anthony Rose, and writers Charles Metcalfe and Simon Woods – were asked to select their personal favourite coup de coeur wines, rather than award trophies, so they were looking for the wines they would enjoy drinking themselves, thus giving a personal point of reference when it comes to the top picks. In addition, there are still Best of Show Red and White wines and, for the first time this year, a Best in Show Rosé.
All the wines – which cover 25 domaines new to the Top 100 – will be available to taste across the country during roadshow events, including a week of tastings around Bastille Day on July 14.

Promotional work is also planned, either in-store or with online merchants, to further raise the profile of these exciting wines among consumers.
Forty per cent of the competition’s wines are available in the UK, with 83% costing above £10 RRP and 40% above £15.
Sud de France food & wine promotions manager Sébastien du Boullay said: “These are all premium wines which over-deliver at their price points.”
Once again the Sud de France Top 100 competition has shown that the region is one of
the most exciting and diverse in the world, with wines that showcase the skills of their producers in reflecting the terroir and honouring the grapes.
In the words of chairman of the judges Tim Atkin: “Southern French reds are some of the most exciting and individual in France, showing a real sense of place. But the whites are really catching up.
It’s not just the best varietal wines – Chardonnay, Viognier and Sauvignon Blanc – but the blends that are worth seeking out, especially those that make the most of Mediterranean grapes.”
Happy tasting.

This website uses cookies to improve your experience while you navigate through the website. Out of these, the cookies that are categorized as necessary are stored on your browser as they are essential for the working of basic functionalities of the website. We also use third-party cookies that help us analyze and understand how you use this website. These cookies will be stored in your browser only with your consent. You also have the option to opt-out of these cookies. But opting out of some of these cookies may affect your browsing experience.
Necessary Toujours activé
Necessary cookies are absolutely essential for the website to function properly. These cookies ensure basic functionalities and security features of the website, anonymously.
Functional
Functional cookies help to perform certain functionalities like sharing the content of the website on social media platforms, collect feedbacks, and other third-party features.
Performance
Performance cookies are used to understand and analyze the key performance indexes of the website which helps in delivering a better user experience for the visitors.
Analytics
Analytical cookies are used to understand how visitors interact with the website. These cookies help provide information on metrics the number of visitors, bounce rate, traffic source, etc.
Advertisement
Advertisement cookies are used to provide visitors with relevant ads and marketing campaigns. These cookies track visitors across websites and collect information to provide customized ads.
Others
Other uncategorized cookies are those that are being analyzed and have not been classified into a category as yet.
Enregistrer & appliquer